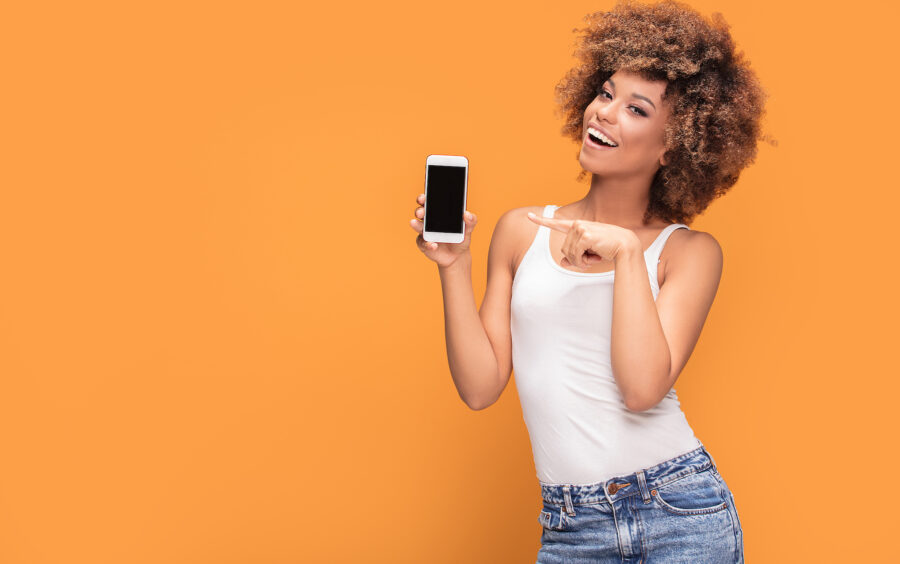 When you’re deciding on which carrier to switch to, it’s important to compare your options, and it’s only natural to pin AT&T and Verizon head-to-head—they’re two major powerhouses in the cell phone game today. When comparing AT&T vs. Verizon, Verizon boasts the most robust network coverage, while AT&T’s network is hot on Verizon’s heels. Both carriers offer plans on the pricier side, and Verizon’s unlimited plans tend to include more perks, such as Apple Music and Disney+. Only AT&T’s most expensive unlimited plan includes an entertainment perk—HBO. Want to know which unlimited plan is the best? Jump ahead to our Let’s Talk Editor’s Pick.

AT&T’s 4G LTE network covers 68% of the U.S., while Verizon’s touts 70% coverage. While both networks are incredibly robust, there are still some pockets with spotty coverage. For example, AT&T only covers 11% of Alaska and also has sub-part coverage in parts of Maine, Wyoming, Nevada, and Arizona.

As for Verizon, there are some spotty areas in parts of Idaho, Montana, Nevada, Utah, and Oklahoma. Check out AT&T vs. Verizon’s coverage maps below to get a better overview of which areas are covered.

Verizon’s coverage map also applies to the MVNOs that run on its powerful network—Verizon MVNOs include Visible, Credo Mobile, GreatCall, Page Plus, and beyond.

Let’s take a look at AT&T vs. Verizon data speeds. Both carriers have powerful networks that will provide you with great coverage and reliability, although there are some important distinctions.

According to Open Signal, AT&T has faster download speeds, averaging 27.5Mbps to Verizon’s 25.3Mbps. Download speeds are important for activities like scrolling through Instagram or Twitter, browsing the internet, streaming TV and movies, and downloading and streaming music. 27.5Mbps is fast enough to play games on your phone or stream video in HD.

Some carriers choose to restrict video resolution or throttle (i.e., slow down) video traffic in order to maintain quality speeds for other activities, but Verizon appears to have found a great balance between providing a solid video experience alongside good network speeds and latency for other online activities.

If you’re looking for an affordable unlimited plan, AT&T’s Prepaid $75 Monthly Plan may be the way to go—when you enroll with AutoPay, the price drops to $50/month, saving you $25/month or $300/year. And AT&T doesn’t even skimp you on perks, either, with 10GB of hotspot and Mexico and Canada privileges. Conversely, Verizon’s prepaid unlimited option costs $65/month with AutoPay, which is far more expensive than AT&T’s and only $5 cheaper per month than Verizon’s first-tier postpaid unlimited plan.

One thing you may want to consider when choosing an unlimited plan is what kind of international perks it includes, especially if you frequently travel over the border. All AT&T unlimited plans include the following travel features:

All Verizon unlimited plans include:

Since the postpaid unlimited plans’ features and prices vary so greatly from tier to tier, we decided to compare AT&T and Verizon’s unlimited plans from each tier.

As you can see below, AT&T’s Unlimited Starter plan is pretty much a bare-bones unlimited plan that doesn’t come with any fun features or perks, while Verizon’s includes Apple Music and Disney+. On both plans you may temporarily experience slowed data speeds due to network congestion, which isn’t really anyone’s favorite.

AT&T only has one mid-tier unlimited plan option compared to Verizon’s two. AT&T’s Unlimited Extra plan has a high data deprioritization, which is great if you plan on using your phone for streaming or gaming, but keep in mind, this plan still doesn’t include any cool entertainment features. Verizon is the clear winner here for entertainment. Also, all three mid-tier plans include 15GB of high-speed hotspot, but AT&T’s slows to a glacial 128Kbps once you’ve used up that 15GB allotment whereas Verizon’s slows to 600Kbps, which is actually useable.

On AT&T’s top tier plan, Unlimited Elite, you get:

The nice thing about HBO with AT&T’s plan is that the subscription is valid for as long as you’re on the plan. Conversely, Verizon only gives you Disney+ for a year, even on its pricy top tier plan; however, you do get Apple Music indefinitely.

Our pick for the best of the bunch is Verizon’s $80 Do More Unlimited plan. With a 50GB data deprioritization threshold, 500GB of Cloud Storage, Disney+, Apple Music, and 15GB of high-speed mobile hotspot, this plan has the perfect balance of price, features, and coverage.

No matter which carrier you go with, signing up for a family plan is a smart way to save money on your phone bill. As with the unlimited plans, AT&T and Verizon’s family plan prices and features are pretty comparable, but Verizon’s edge out AT&T just slightly.

AT&T and Verizon both offer a variety of family plans, from prepaid to unlimited to limited data. One major difference between the two is that Verizon offers a mix and match capability for all unlimited plans, whereas AT&T only offers this option on its prepaid family plans.

AT&T offers a wide variety of family plans, including unlimited, limited data, as well as prepaid, which gives you the option of mixing and matching so that everyone can have exactly what they need.

One notable feature to call out about Verizon family plans is that you can add a Just Kids line onto a family plan (first line must be unlimited). The Just Kids line includes 5GB of data and highly customizable parental controls.

AT&T and Verizon both sell the latest and greatest smartphones from popular brands, such as Google, Samsung, Apple, LG, and more. The availability of older models varies slightly between carriers, but not enough to really notice. Through both AT&T and Verizon, you can either buy your device outright or buy it on monthly installments.

Looking to buy a new phone? Check out our list of the best cell phone deals, which we update weekly.

A phone payment plan is a helpful way to reduce the financial burden of buying a new phone. Instead of paying the full retail price upfront, the retail price is split into smaller, more manageable payments, which you pay over a predetermined set of time. AT&T and Verizon’s monthly device installment plans differ in installment term length and number of options.

Both AT&T and Verizon offer excellent deals on new and old devices alike. It can be difficult to keep up with these ever-changing promotions, which is why we’ve done the dirty work for you. Although both carriers consistently have great promotions, Verizon generally offers more deals to existing customers compared to other carriers, including AT&T. Most of the deals across all carriers are only available for new customers, but Verizon also offers some deals for existing customers who upgrade (although the discount typically isn’t as big as it is for new customers). While AT&T also offers some deals for existing customers, that isn’t always the case.

Another benefit of Verizon phone deals is that you only have to stay with the carrier for 24 months to get the full discount, whereas with AT&T, you’re usually stuck with them for 30 months.

Who is Cheaper, AT&T or Verizon?

AT&T’s unlimited and family plans tend to cost a bit less than Verizon’s, although the difference isn’t super noticeable. However, Verizon offers several prepaid plans that are cheaper than AT&T’s prepaid options. Both carriers offer fairly expensive phone plans compared to other carriers.

How Do You Switch from AT&T to Verizon?

In order to switch from AT&T to Verizon, you’ll first want to make sure Verizon provides adequate coverage in your area. You can do this by inputting your address into our search tool. Once that’s a go, you’ll want to check your phone’s IMEI in order to ensure it can be used on Verizon’s network. You’ll then want to make sure your phone is paid off, otherwise AT&T won’t unlock it. Make sure to keep your service active on your AT&T plan until the switch is complete. Before switching, it’s important to research and compare Verizon’s plans so you can find one that suits all your needs. Once you’ve chosen a plan, get a SIM card from Verizon, activate your cell phone plan, and port-in your number. Once your number is successfully transferred to Verizon, your AT&T service will automatically disconnect.

Can I Use an AT&T Phone on Verizon?

Yes, your AT&T phone will most likely work on Verizon’s network. Keep in mind, however, that Verizon uses CDMA technology while AT&T uses GSM, which means that some older AT&T devices may not be compatible with Verizon.

Can a Verizon Phone Be Used on AT&T?

Yes, your Verizon phone will probably work on AT&T’s network. Most newer phones are compatible with both networks, while older models may not be.

Who Has Better Coverage?: AT&T or Verizon?

Verizon’s network coverage just beats out AT&T’s, with 70% nationwide 4G LTE coverage compared to AT&T’s 68%. Both carriers offer robust coverage with relatively few spotty areas. When it comes to cell phone coverage for calls and texts, both carriers cover the majority of the country.