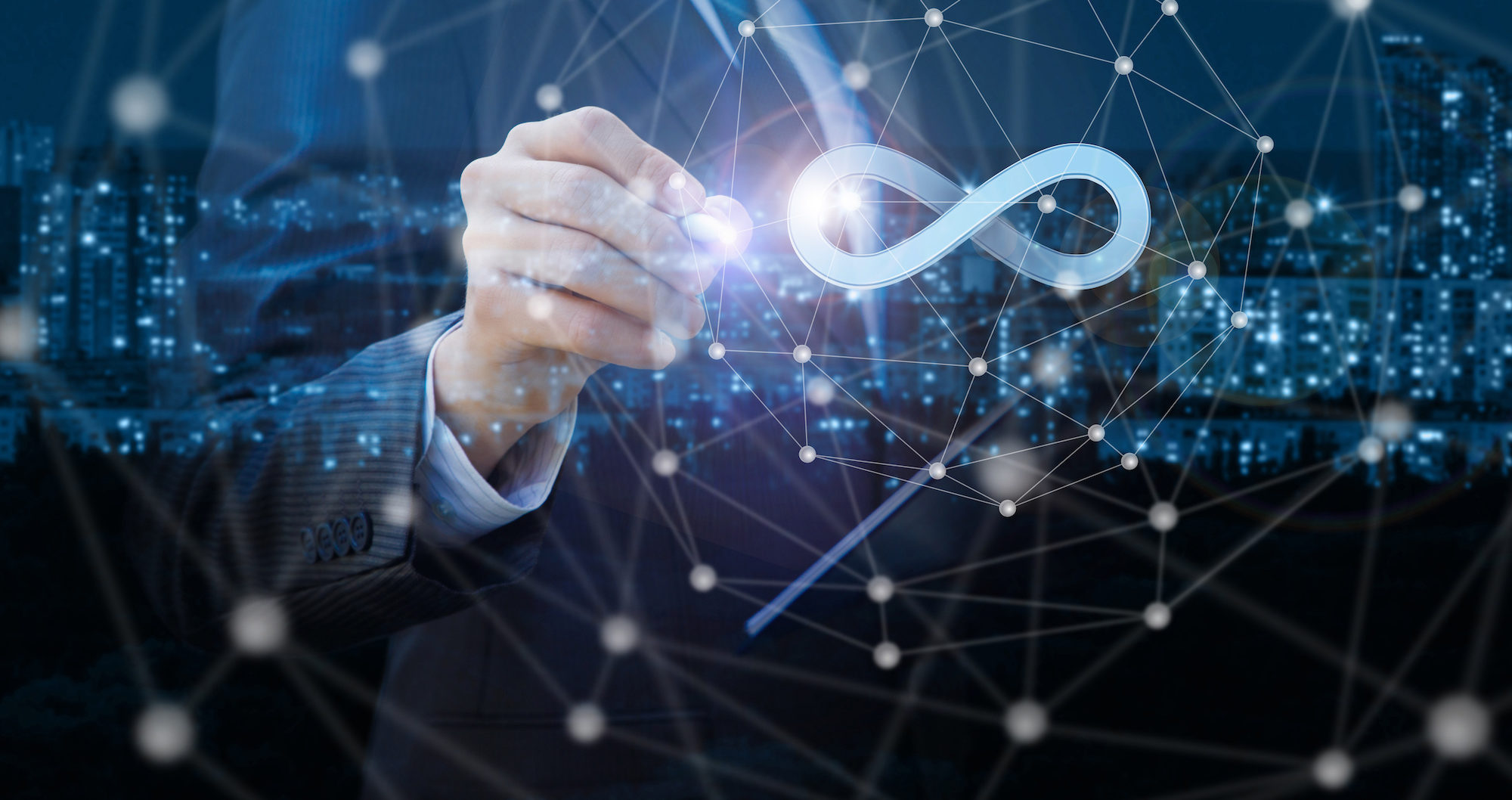 Let’s Talk wants you to have the best possible cell phone plan for your lifestyle, and that’s why we regularly curate and compare the best plans from more than 35 carriers. Right now, there are hundreds of plans to choose from, but if we’re honest with ourselves, the plans we really want (and sometimes need) are unlimited everything, with an emphasis on unlimited data plans. This can be pricey, but nothing is more annoying than Hulu buffering right when the Bachelor is about to hand out his final rose.

This guide will walk you through the best unlimited data plans and help you find one that’ll help you get the most out of your favorite online activities.

Get Free Entertainment Subscriptions with Your Plan!

Right now no major carrier can compete with Sprint for the least expensive plan, as they are offering unlimited talk, text, and data for only $35/month. Although this might seem like a steal of a deal, you’ll pay for it with potentially frustrating service. However, if you’re looking to save money, this is the plan for you.

Sprint has the least amount of nationwide coverage of the four major carriers—unless you live on the East Coast or in a few states throughout the West, you may want to bypass this plan due to lack of coverage in your area.

Because this is a prepaid plan, you will pay for your service before you use it. For $60/month, Metro by T-Mobile is offering unlimited high-speed data (data slows down after 35GB on congested networks) AND 15GB of high-speed mobile hotspot use. With Metro, you’ll get the same coverage as T-Mobile, but for a smaller price. This plan also comes with awesome perks like:

Because Verizon is the number one carrier in terms of nationwide coverage, you can’t really go wrong picking any of their plans. However, we think their BEST plan is the Verizon Unlimited Plan with free Apple Music, 15GB of hotspot use, and unlimited high-speed data, calling and texting. At $85/month this is the most expensive unlimited plan on our list, but there is a price to pay to be on America’s best network with all of these perks.
Keep in mind that although this plan is pricey there are some that cost even more so, technically, you can still tell yourself you’re saving money with this plan.

Save $5 on your monthly Verizon bill by enrolling in autopay

To see other family plans, and find the best deals, check out our regularly updated guide: The Best Family Plans

AT&T is trying really hard to win you over by offering great perks and stellar pricing for this plan. The Unlimited Elite plan is their best plan overall. In fact, it’s so good, we made it our Let’s Talk Editor’s pick AND top choice for Best Unlimited Family plan. At $85/month, it’s the same price as Verizon’s best plan and offers way more perks—HBO, 100GB data deprioritization (this is OUT OF THIS WORLD), 30GB hotspot, unlimited talk, text, and data in Mexico and Canada, unlimited texting to over 120 countries, and HD streaming.

Sprint’s plans are priced well below their competitors, but that’s because they have to make up for their spotty service. Having said that, their best plan, Unlimited Plus, is very tempting with free Hulu and Tidal subscriptions, unlimited service to and from Canada and Mexico, and 10GB of data to use abroad all for only $60/month.

T-Mobile’s pricing isn’t very competitive, and neither are their perks, however, this plan does give you the basics for a somewhat reasonable price. Although you won’t get a free Netflix subscription like T-Mobile’s more expensive plans, they will cover your remaining phone payments (up to $650), which will save you money IF you have a phone to pay off.

Which States Offer the Fastest (and Slowest) Mobile Data Speeds? 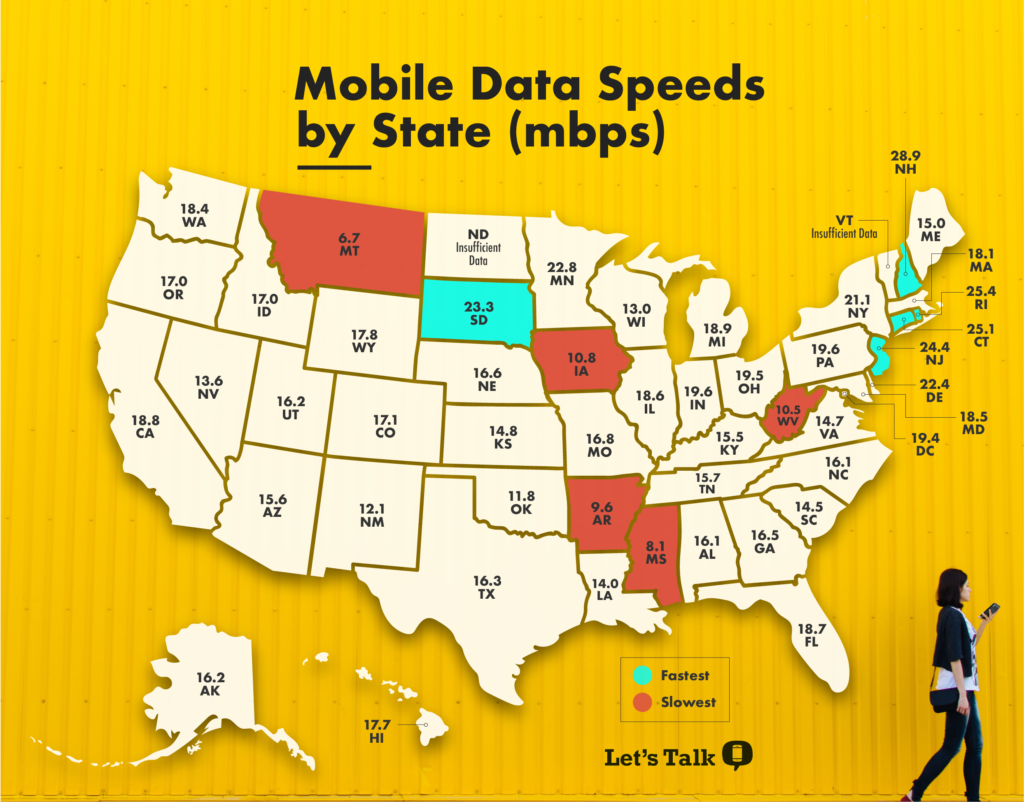 It’s good to live in the northeast if you rely heavily on your phone for browsing, streaming, shopping, and other internet-related activities. Test results indicate that New Hampshire has the fastest cellular data speeds in the country, followed by Rhode Island and Connecticut. Iowa, West Virginia and Arkansas are home to the slowest speeds (respectively).

New Hampshire’s 28.9 megabits-per-second average download speeds are a full 3.5 megabits faster than Rhode Island’s. Rhode Island (25.4), Connecticut (25.1) and New Jersey (24.4), meanwhile, are far closer to one another. South Dakota is the only non-northeastern city to make the top five.

States with the Fastest Mobile Data

States with the Slowest Mobile Data

How Let’s Talk Collected the Data

The Let’s Talk team analyzed data from ~100k mobile speed test results taken on HighSpeedInternet.com and ranked the states according to that data. Vermont and North Dakota were excluded from the ranking because of insufficient data.

Uploading constitutes a relatively small fraction of our overall internet activities; downloading is what we’re mostly doing when we load a web page, stream a video, or play a game. That’s why download speeds are important to consider when analyzing cellular data, and why we’ve highlighted them in our report.

Let’s Talk simplifies the search for the perfect cell phone plan—say goodbye to reading fine print, comparing dozens of plans side by side, and interpreting confusing language. Our experienced team of writers take a fine-tooth comb to all of the phone plans and phone deals out there to discern what the best cell phone plans are. We compile the top results in highly-organized and easy-to-read articles that we update on a regular basis according to market changes. When you land on one of our pages you can rest assured that you’re getting timely information.

The Best Family Plans for January 2020

ABOUT US
Unbiased recommendations on the best cell phone plans and deals based on value for money, coverage, and service. We do the the research and comparisons so you don't have to.
© 2020 LetsTalk.com