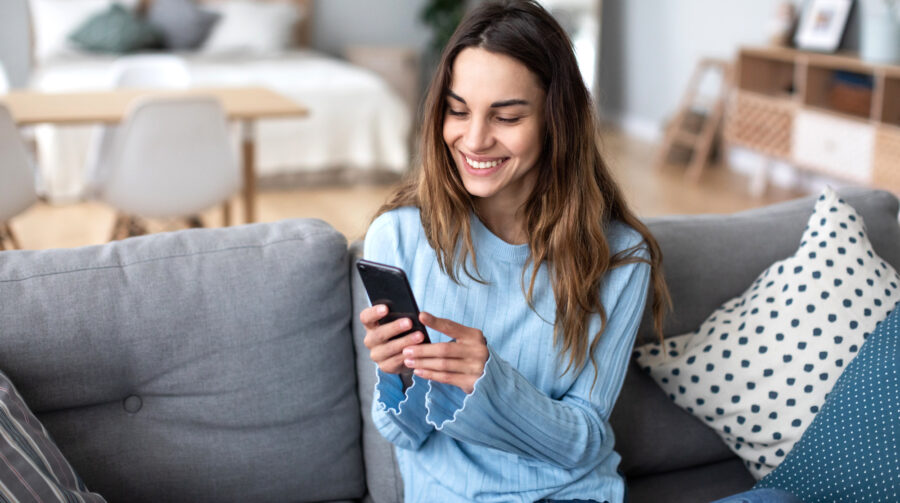 The average U.S. adult spends an estimated $114/month on their cell phone bill—that’s equal to $1,368/year! The good news is you don’t have to be at the mercy of your exorbitant phone bill any longer. There are many different ways you can reduce your phone bill, including:

The reality is, many people sign up for a plan through one of the Big Four carriers—Verizon, T-Mobile, AT&T, or Sprint—without realizing that there are cheaper alternatives out there. You may be surprised to hear that there are over 50 MVNOs in the U.S., and these small carriers offer plans at a quarter of the price of the major carriers.

Check How Much Data, Talk, & Text You Use

Unlimited data plans are all the rage nowadays—with the major carriers pushing them hard in their marketing efforts, you may have inadvertently signed up for an unlimited plan when you don’t really need one. The average adult in the U.S. on an unlimited plan uses just 6GB/month of smartphone data. That’s not nearly enough to justify paying the high price tag on an unlimited plan.

Figuring out exactly how much mobile data you need each month is the first step in reducing your costs. Most people on unlimited data plans are blissfully unaware of how much data they’re using, and while certain demographics, like heavy streamers and smartphone gamers, do need unlimited data to avoid overage fees and disruptions to their daily activities, the majority of us do not.

The majority of unlimited plans offered by the Big Four cost between $60/month and $90/month, which means you could be spending up to $1,080/year on just your service plan. Meanwhile, MVNO plans start as low as the price of a fancy latte. Choosing a limited plan could leave you with extra cash for groceries, restaurant delivery, toilet paper, you name it. For example, by switching from AT&T’s Unlimited Elite Plan ($85/month) to Red Pocket’s 3GB plan ($19/month) and utilizing your in-home WiFi, you would save $66/month or $792/year.

Here’s how to check how much data you use on your iPhone:

How to check your data consumption on your Android phone:

You can easily check how many texts and minutes you’ve used by consulting your phone bill. You may be surprised by the low number of minutes you use each month, despite your unlimited talk allowance. If you find that you don’t really need unlimited talk, text, or data, you may want to look into a cheap build-your-own phone plan through Tello, Ting, or US Mobile. These MVNOs offer flexible plans that allow you to customize your plan so that you only pay for what you need.

Connect to WiFi to Save Data

Switching to a cheap limited data plan doesn’t mean you can’t stay connected. Since you’re most likely practicing social distancing by staying home during the coronavirus pandemic, connecting your phone to your in-home WiFi means you’ll only need a fraction of the mobile data you would normally.

Hint: make sure WiFi calling is turned on so you can make phone calls over WiFi while you’re stuck at home.

Switch to a Prepaid or MVNO Plan

Prepaid plans, which you pay for at the beginning of each billing cycle, are typically more affordable than traditional postpaid plans, plus they allow you to forgo a credit check. Major carriers, such as T-Mobile and Verizon, and small carriers, like Metro by T-Mobile and Cricket Wireless, sell prepaid phone plans.

If you’re looking to save big and reduce your monthly phone bill, you may want to consider switching to an MVNO—1GB plans start as low as $7/month. MVNOs, which run on one or more major networks, are able to sell phone plans for cheaper than major carriers because they rent network space from the major carriers and don’t have the costs of maintaining an entire network themselves. When you buy an MVNO plan, you receive the same coverage as the parent network(s) at a fraction of the cost.

Some popular MVNOs and their parent networks:

Check out all the MVNO plans with at least 1GB of data below.

Most MVNOs make it extremely easy to switch and save, but if you’d prefer to stay with your current carrier (who, let’s be honest, is probably one of the Big Four), you should consider a prepaid plan. There isn’t much of a difference between prepaid and postpaid plans from these major carriers since they all got rid of contracts.

The main difference is that prepaid offers more budget-friendly options, while postpaid plans are generally targeted toward those who want premium plans with all the bells and whistles. While Sprint doesn’t currently offer any prepaid plan options, Verizon, AT&T, and T-Mobile do. Some of the cheapest prepaid plans offered by these three majors right now include:

The AT&T $15 Prepaid Plan is only available for a limited time because AT&T has stated the cheap plan is temporary in order to relieve financial stress in wake of the COVID-19 pandemic. No word yet on how long this plan will be available.

If you still want unlimited data and don’t mind switching, Sprint’s Kickstart Unlimited Plan costs just $35/month and includes unlimited everything. This offer is only available for new customers.

Check out the affordable prepaid plans offered by major carriers below.

Keep Your Smartphone For Longer

Chances are, you bought your new smartphone on monthly installments, in which the retail price of the phone is broken up into affordable monthly payments, made over a predetermined period of time. Verizon and T-Mobile have 24-month device installments, AT&T has 30-month installment plans, and Sprint’s leasing program lasts 18 months. One of the major reasons behind an expensive phone bill is the monthly installment cost for your phone, which is bundled with your service bill and adds anywhere from $25/month to $50/month to your phone bill.

Although it can be tempting to buy a shiny new device, one easy way to lower your phone bill is to keep your phone once you’ve paid it off via the monthly installment. Sure, you won’t have the latest and greatest phone on the market, but you’ll also be able to relax knowing you’re saving hundreds of dollars per year. Moreover, phones aren’t going through serious upgrades from model to model anymore—most of the notable changes apply to camera features, and even then, most older phones still have decent cameras. It’s not really worth upgrading every single year or every other year.

Consider Switching to a Family Plan

Signing up for a family plan is a smart way to lower your monthly phone bill—most carriers offer discounts for each line you add to a phone plan. Many four-line family plans can save you anywhere from $15/month to $40/month per line. And if you and your family members can’t decide on a plan that satisfies everyone, you can check out Verizon or Sprint, both of which allow you to mix and match your family plans.

Visible, a Verizon MVNO, offers unlimited data for just $25/month per line when you sign up for a four-line family plan.

Every day, carriers big and small are offering new deals on phones, plans, and more. It’s virtually impossible to keep track of all these carrier deals, which is why we do it for you. Here at Let’s Talk, we bring you the best deals every single week, whether you’re looking for a new phone (hello, trade-in deals!) or a cheap phone plan.

Check out some of our top deals pages below:

The most popular types of phone deals include trade-in deals and BOGO deals—occasionally we even come across some deals that include a free phone just for switching to the carrier. If you don’t want to hold on to your old phone once you’ve paid it off, you’ll definitely want to take advantage of a trade-in deal to knock some serious cash off the price of your new phone.