LG has released the newest foldable phone, LG G8X ThinQ, joining the likes of the Samsung Galaxy Fold, the Motorola razr, the Huawei Mate X, and more. So how good is the LG G8X ThinQ? Is it worth checking out, or will it fail to launch like the significantly delayed Galaxy Fold? Read on to find out.

What is the LG G8X ThinQ?

The LG G8X ThinQ is LG’s flagship contribution to the foldable phone market, and right now, it’s winning. You may recognize the name. In March 2019, LG released the LG G8 ThinQ, its most powerful smartphone to date; the LG G8X is the G8 ThinQ on steroids. LG switched some hardware features and added a dual-screen feature. The result? A beautiful, sophisticated device that is bound to impress all your friends. LG markets this phone as the ultimate multi-tasking device—now, you don’t have to choose between watching Game of Thrones and messaging your Bumble matches.

The LG G8X ThinQ is currently available from major carriers, such as AT&T and Sprint. You can also buy it at retailers, such as Best Buy and Amazon.

How is the LG G8X ThinQ Different From the Galaxy Fold?

The main difference between the LG G8X ThinQ and the Samsung Galaxy Fold is that while the Galaxy Fold actually has a foldable screen, the LG G8X consists of two separate screens—known as a clam-shell design. The 360 Freestop Hinge on the LG G8X ThinQ holds the two screens in whichever position you want, creating a unique smartphone experience. 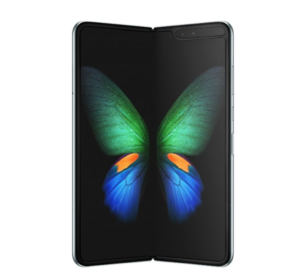 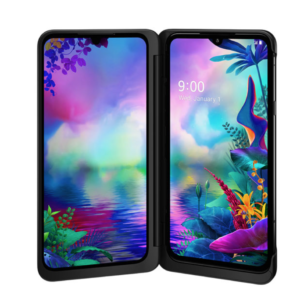 While both screens on the LG G8X are the same size—6.4-inch—the Samsung Galaxy Fold consists of a 4.6-inch display on the outside and a 7.3-inch display on the inside. The Galaxy Fold is designed to give you more screen space (and uses expensive tech to bring you this experience), whereas the G8X ThinQ operates more like two separate phones, side by side. Because of these two large screens, the LG G8X ThinQ is bulkier than the Galaxy Fold, which may be a deterrent for some customers, although the Galaxy Fold actually weights more. If you’re wanting to travel light, you can always detach the accessory screen and voila—you’ve got a single-screen phone for on-the-go.

Another major difference is that when closed, the Galaxy Fold is not only much smaller than the G8X ThinQ, but its fully functional 4.6-inch screen allows you to use it when it’s closed. Conversely, although the outside of the LG G8X ThinQ has a small, third screen, it is really only good for basic functions like telling the time and checking the battery level.

Without a doubt, the LG G8X ThinQ is much more durable than the Samsung Galaxy Fold—the Galaxy Fold is not water or dust-resistant and the overall consensus among users seems to be that it is still quite fragile, despite the fixes Samsung made after they delayed the release. Not to mention, one quick peek at the price tags will show you that the Galaxy Fold costs more than twice as much as the G8X ThinQ.

Although the LG G8X ThinQ is a great choice for early adopters looking to get a unique and futuristic mobile experience, it has a few drawbacks. One of the most obvious is the pure size of the device—when opened, you’ve got two 6.4-inch screens in your hand. It requires two hands to use it, unless you’re the Hulk or Hagrid. Additionally, the main phone weighs more than the second screen accessory, which throws off the center of balance a bit.

Another potential con is that the noticeable hinge between the G8X ThinQ’s two screens, which probably isn’t going to cut it for those looking for flawless media immersion. The G8X ThinQ is better for multi-tasking than watching TV and movies.

Lastly, the G8X ThinQ runs on Android Pie 9.0 instead of the recently released Android Pie 10, which has updated functions specifically for foldable phones. Consequently, the controls are not as intuitive as they could be.

Pros of the LG G8X ThinQ

The $700 price tag on the LG G8X ThinQ wins this device major points. It is the same price as the iPhone 11 and cheaper than other flagship devices like the Google Pixel 4 and Samsung Galaxy Note10. And those phones only have one screen to work with! The LG G8X ThinQ is also far cheaper than other foldable phones—the Galaxy Fold costs nearly $2,000 and the Motorola razr is priced at $1,500.

Another advantage to the G8X is its excellent multi-tasking capabilities—you can run two apps side by side. With this device, you can conceivably watch Netflix, Hulu, or Disney+ on one screen and read the news on the other. Or, you can use your phone as a mini laptop, with the bottom screen turning into a keyboard. This is especially useful for sending long emails or writing in a Word document. For gamers, LG’s Game Pad app utilizes the second accessory screen as a virtual game controller, freeing up the entirety of the main screen for gameplay graphics (as opposed to having the buttons on the same screen).

The G8X ThinQ features a highly-responsive fingerprint reader, sophisticated cameras powered by AI software, and a long battery life. Plus, the 128GB gives you tons of storage and you can even expand it with a microSD card.

Let’s Talk Take: To Buy or Not to Buy

The LG G8X ThinQ is a fun, sophisticated toy with an impressive look and great performance. And at $700, it is without a doubt worth the price. Although the sheer size of it may be off-putting for some customers, it’s an excellent and affordable choice for mobile customers looking for more screen space, an enhanced entertainment experience, or superior multi-tasking abilities. Foldable phones are the future of mobile devices, and although technically this is two phones in one, we think it’s the way to go for budget-minded consumers who value durability, functionality, and innovation.

How Much Data Does Pandora Use?

How Fast is My Internet? Do an Internet Speed Test