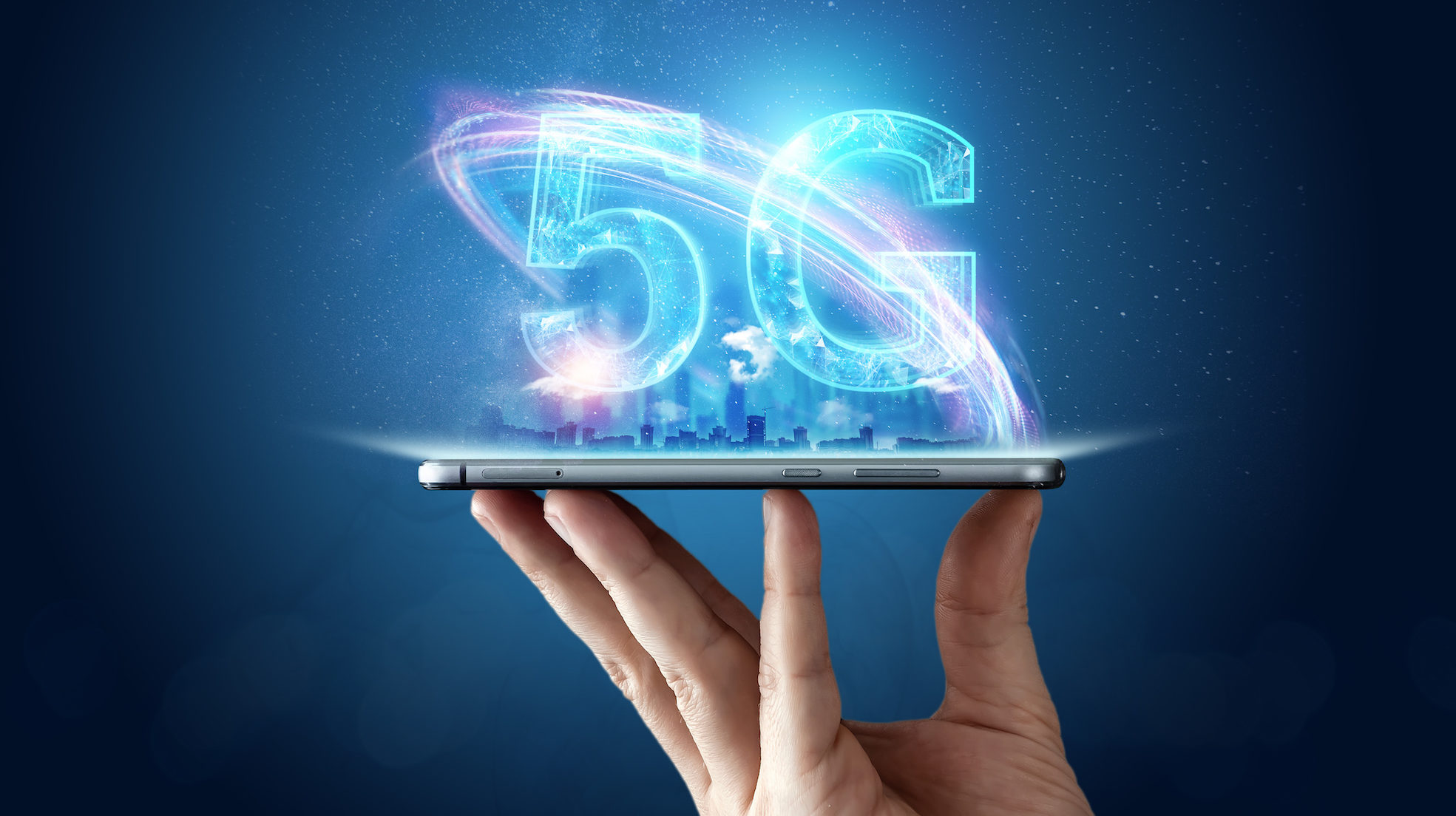 As carriers continue to improve their 5G coverage, AT&T is making a name for itself by marketing three 5G networks: “5G Evolution,” which isn’t really 5G, and “5G” or “5G+,” both of which deliver true 5G speeds. AT&T’s 5G network coverage is constantly expanding, with coverage in 150+ cities.

But what about its phones? What 5G phones does AT&T have to offer? It currently sells five 5G phones through two of its 5G-capable plans, but each of these phones offers different benefits at widely different price-points. Read on to learn all about AT&T 5G and 5G phones.

AT&T has a couple of different names for its 5G networks: 5G or 5G+, and 5G Evolution.

In order to be one of the very first networks to claim 5G support and 5G speeds, AT&T took to marketing its 4G LTE Advanced technology as “5G Evolution” or 5G E. This irritated many other carriers, because the technology, while fast, is not actually 5G or capable of delivering 5G speeds.

AT&T refers to its true 5G network as “5G” or “5G+” to differentiate it from other brands, just as Verizon calls its 5G network “5G Ultra Wideband.” The main difference between 5G and 5G+ is that the latter offers even faster speeds by using millimeter wave bands, while 5G only runs on low-band frequencies, similar to T-Mobile’s 5G network. 5G+ has extremely limited coverage, with availability in some parts of about 35 cities.

If you’re looking to buy a 5G phone through AT&T, you’ll only be able to enjoy 5G access on its highest-priced Unlimited Extra and Unlimited Elite plans or the Prepaid Unlimited Plus plan, which is only $50/month.

Unlimited Extra is AT&T’s mid-tier unlimited plan, priced at $75/month for just one line. Besides 5G access, you’ll also get perks like 15GB of mobile hotspot and a 50GB data deprioritization threshold.

For an additional $10/month for one line, AT&T’s Unlimited Elite offers even better perks including a 100GB data deprioritization threshold, 30GB of hotspot, high-definition streaming, and an HBO Max subscription.

Where is AT&T 5G available?

AT&T’s super-fast 5G+ network is limited to select areas of about 35 cities, but its regular 5G network covers 150+ cities. All 5G phones are able to switch seamlessly between 4G, 4G LTE, and 5G networks, so you’ll still be covered even if your area does not have 5G or 5G+ coverage. Check out the coverage map below to see where AT&T 5G and other carrier’s 5G networks are available.

If you do want a super-fast 5G connection, AT&T’s 5G+ network is currently available in:

What 5G phones does AT&T sell?

AT&T currently offers five popular 5G phones, including the Samsung Galaxy S20 5G series phones, the LG V60 ThinQ 5G, and the Samsung Galaxy Note10+ 5G. Fortunately, AT&T often has deals tied to most of its newer phones, so you can save a little extra if you do decide to purchase a 5G phone with AT&T.

Can’t decide which 5G phone you want from AT&T? Read on to check out some of the pros and cons of AT&T’s 5G phones.

If you like a smaller screen (6.2-in), or if you’d like to keep your new phone under $1,000, the Samsung Galaxy S20 5G packs a punch. Priced at $999 outright or $33.34/month over 30 months, it offers a 64MP triple camera with some crazy zoom capabilities and large sensors for extremely precise photos. Better yet, you can take 8K videos with any of the S20 series phones.

Perhaps the main downside to the S20 series phones is its average battery capacities, with the S20 5G phone only offering a 4,000mAh battery capacity on average, which will last about a full day of use. Compare this to the LG V60 ThinQ 5G, with a 5,000mAh battery, which could last up to several days without charging it.

The mid-range price option for the S20 series phones, at $1,199.99 outright or $40/month with AT&T’s 30 month installments, the S20+ 5G offers the most color variations of the S20 phones, a large 6.7-in screen, quad 64MP cameras, and a slightly better battery capacity at 4,500mAh on average. If you’re looking for a large screen and some great phone specs without breaking the bank, the S20+ 5G might be the best option for you.

At $1,399.99 outright, you might be wondering why someone would pick the Samsung Galaxy S20 Ultra 5G. But a super large 6.9-in screen, 108MP quad camera, and the best zooming capabilities of all the S20 phones might tempt some people, especially when you can take advantage of AT&T’s 30-month installment option and pay just $46.67/month.

AT&T’s cheapest 5G phone, the LG V60 ThinQ 5G, costs $899.99 outright or $30/month and is a great choice for a 5G phone, especially if you’re looking for a little more screen size with a 6.8-in display and an additional detachable 6.8-in Dual Screen included for free. Featuring 8K video recording, 64MP triple cameras, a 5,000mAh battery capacity on average and super-impressive audio capabilities, this LG phone offers a lot of great specs at a decent price point.

Although the Samsung Galaxy Note10+ 5G is the oldest phone in this line-up, and fairly expensive at $1,299.99 outright or $43.34/month, you still get an impressive 6.8-in display, a large 256GB storage size, 16MP quad cameras, 4K UHD video recording capabilities, and a 4,300mAh battery capacity. Plus, you’ll also get an S Pen, which lets you draw, write, or take pictures with ease. It’s a great 5G option for people who were already huge fans of the Galaxy Note series.

How to buy a 5G phone with AT&T

With outright pricing, you can purchase a phone at the full price, plus any additional taxes and fees, and theoretically own it outright. However, if you decide to leave AT&T and switch to another carrier with your new phone, you’ll still need to have at least one month of active service with AT&T and fulfill other unlocking requirements.

You can break up phone payments over 30 months for as little as $0 down with the AT&T installment plan, with payments ranging anywhere from $30/month to $46.67/month for its 5G phones. Putting $0 down is limited to well-qualified customers only, but you can still take advantage of monthly payments even if you do not meet these requirements. Keep in mind, however, that you may need to pay a down payment anywhere between 15% to 80% of the phone’s cost.

AT&T’s plans are contract-free, but if you do choose to purchase a phone through installments with AT&T, you’ll have to maintain service with AT&T on that phone in order to take advantage of its financing offer. You can still choose to switch carriers even while financing your phone through AT&T, but you’ll need to pay off your phone completely and meet other unlocking requirements first.

AT&T also offers an upgrade program attached to its 30-month financing option, called AT&T Next Up. You’ll pay an additional $5/month on this option, which will allow you to trade in your old phone and upgrade to a new phone once you’ve paid off 50% of your old phone. The Next Up program is a great option if you’re on the hunt for the best and newest 5G phone, especially as more manufacturers are pushing out 5G phones to meet consumer demand.

The Best Family Plans for June 2020